We're a group of passionate serial entrepreneurs, business people, & technologists that love serving you - our customer.

The idea for SubCentral came out of frustration from our founder & CEO's experience in building and running the finance organization of a venture-backed cloud software company. As the first finance employee and VP of Finance, Jason built the foundation of process and control in preparation for a successful $15M growth-stage equity financing.

After a period of significant growth, Jason woke up one day and realized he had completely lost control of cloud software costs - the traditional internal controls had failed.

During the period of rapid growth, Dan had joined the team of the same company to lead the implementation of a subscription billing system - Zuora - to replace the company's internally built billing system.

Jason and Dan worked together closely for many months to ensure the technology supported the financial requirements of the business.  While working together, Dan introduced Jason to Adam, where they had worked together at a prior role.  Shortly after, the three began building a stock option pool management tool called Optionee.

After a successful six months of development on Optionee, Jason proposed a new, bigger opportunity and the three set off on building the industry's first cloud software subscription management tool.  SubCentral was born.

Jason is a serial entrepreneur - having raised over $20M in debt & equity capital for startups - and came up with the vision for SubCentral while living the problem in multiple financial leadership roles.

Jason's passion is seeking adventure in all parts of the world, having been to 23 countries including Australia, Brazil, India, & Japan.

Dan has experience designing software solutions for every aspect of a business. At SubCentral his role spans software architecture, systems and infrastructure, and IT while also focusing on feature development.

On the rare occasion that Dan is not working or spending time with his family, he is wandering the vast wildernesses of western Pennsylvania.

SubCentral is a venture-backed company by Birchmere Ventures, a top-tier investment fund focused on SaaS solutions with an emphasis on marketplaces.

Our investors & advisors have more than 100 years combined experience in building and scaling SaaS companies, including experience in raising hundreds of millions in capital and exiting multiple billion dollar companies. 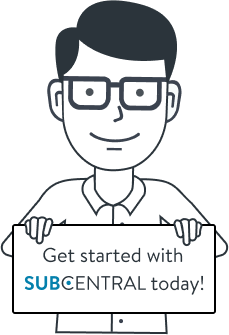 Get a free 1-on-1 cloud software consultation.